For the past nine months I’ve been working on a project with nine women artists.

We were all given a shoe box and a list of nine artefacts:

1) doll or similar toy
2) bundle of letters/cards/photos etc
3) a heart
4) needle case OR pin cushion – possibly made as a sampler
5) personal item of clothing such as a glove, baby shoe, scarf etc…
6) a game or toy piece – all that remains of a set of something such as a
farm animal, a jigsaw piece etc
7) a lucky charm/ amulet / icon
8) a rattle or baby toy that makes a noise
9) a memento of a significant event

One of these things should be a piece of jewellery
PLUS the journal – which can be either a sketch book or the story of the items
in the box. 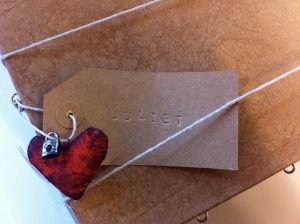 I found it a real challenge to fit my idea within the constraints of the brief and the scale of the work.  I often make life size figures, or large pieces of work so to scale it all down so that all nine objects could fit into a shoe box stretched me in many ways.

The art of bringing things to life.

Puppets are objects that always appear to be as much dead as alive; always on the brink of life or death, on the edge, the not knowing.  Puppets are figures of metamorphosis, of magical potential.  They stand on the cusp of what is real and what is longed for.

After a couple of false starts I returned to puppets and began to wonder how I might bring a puppet to life.  I fantasied about sitting down with various artists and writers to discuss this matter.  Given that this would always remain a fantasy, I took the liberty of taking ideas and thoughts from them to inspire a collection of objects that I am convinced would do the trick…. 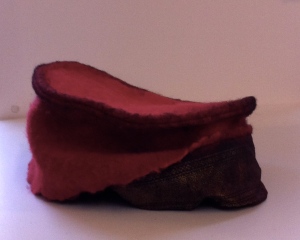 Detail of text inside the memory hat

Lord Shiva and Lady Parvati were walking through the bazaar when they saw two carved dolls lying on a carpenter’s table, their wooden limbs jointed and pegged.

“Let us put our spirit into those dolls,” said Lord Shiva.  They did and the dolls began to dance.  Soon a crowd gathered.

“Why, they look almost alive,” an old woman gasped.  Children laughed and clapped their hands.  When Lord Shiva and Lady Parvati withdrew their spirits, the dolls slumped to the ground.

The carpenter tied pieces of string onto each of the dolls’ jointed limbs.  When he lifted the strings, the dolls slowly rose, then, as he gently pulled the strings they began to dance.Lord Shiva smiled, “When you put your spirit into them, you too, can bring them to life.”

A Hindu Legend: The first Marionette

If you only had brains in your head you would be as good a man as any of them, and a better man than some of them.

Brains are the only thing worth having in this world, no matter whether one is a crow or a man.

The father and son looked immediately up to the ceiling and there on a beam they saw the Talking-cricket.

“Ah! now you call me “Your dear little Cricket.”  But do you remember the time when you threw the handle of a hammer at me, to drive me from your house? …”

“You are right, Cricket! Drive me away also … throw the handle of a hammer at me; but have pity on my poor papa …”

“I will have pity on both father and son, but I wished to remind you of the ill treatment I received from you, to teach you that in this world, when it is possible, we should show courtesy to everybody, if we wish it to be extended to us in the our hour of need.”

A pattern and instructions on how to make a heart

For once you have tasted flight you will walk the earth with your eyes turned skywards, for there you have been and there you will long to return. 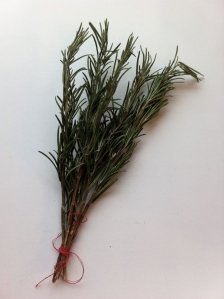 A bunch of rosemary

I could feel the hot breath on my neck.  Then the skin of my throat began to tingle as one’s flesh does when the hand that is to tickle it approaches nearer, nearer.  I could feel the soft, shivering touch of the lips on the super sensitve skin of my throat, and the hard dents of two sharp teeth, just touching and pausing there.  I closed my eyes in languorous ecstasy and waited, waited with beating heart. 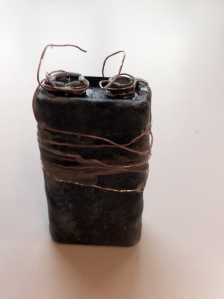 ‘Hateful day when I received life!’ I exclaimed in agony.  ‘Accursed creator! Why did you form a monster so hideous that even you turned from me in disgust? God, in pity, made man beautiful and alluring, after his own image; but my form is a filthy type of yours, more horrid even from the very resemblance. Satan had his companions, fellow-devils, to admire and encourage him; but I am solitary and abhorred.’ 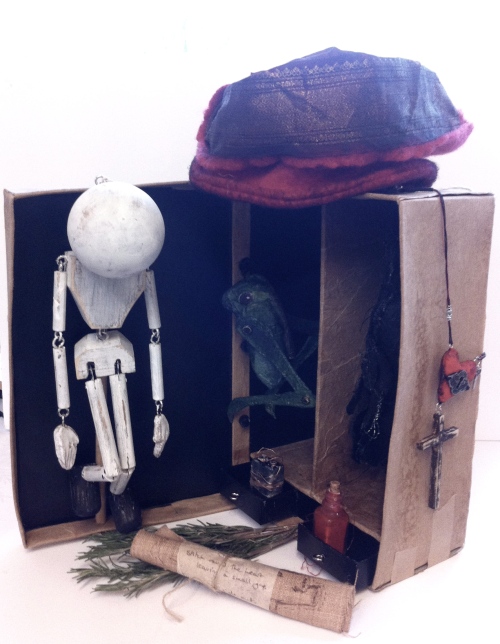 These Foundlings are my latest work.  They are all for sale! Just drop me a line if you want to give one a home.

I begin by walking. All things that happen, happen somewhere, binding story to place, and the way I feel and think about the landscape is rooted in stories.

The East Anglian coastline is my landscape, my ‘local’.  There are traces left on this landscape that both provoke and evoke memories, occurences and history. It is about connections – what has happened and what will happen.

Walking through a physical landscape produces a memory map of the place. Images, sounds, smells and textures underfoot are stored in the mind.  By revisiting a place over and over again different experiences are layered one on top of another.  The way that shingle banks reform daily; relics of defences that are revealed when the tide is low and concealed when high; evidence of fossilised wood, the sharks’ teeth that are scattered on the sand as the waves recede; the skies as the sun sinks and trees that stand on the edge of the cliff poised as if to dive.  All of this peels away at a place, so that it unfurls to allow a glimpse of what has been and what might be. 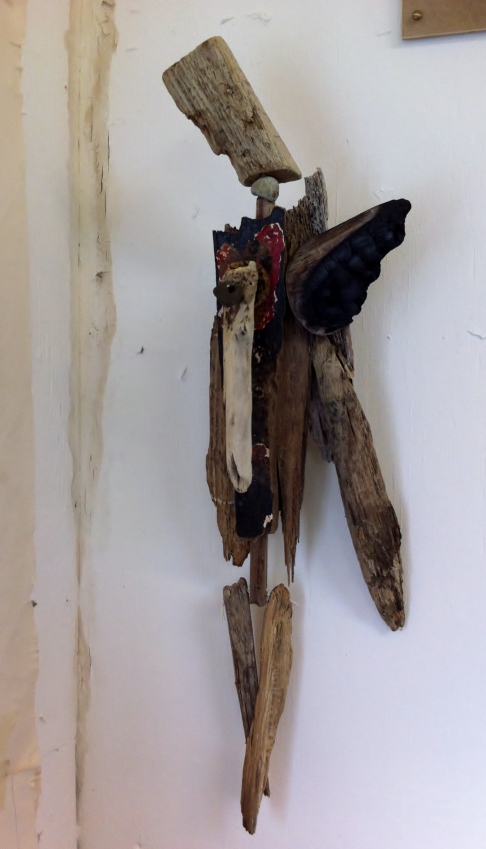 The initial findings then, come from this tidal landscape.  A place of constant change, a shape shifting, volatile place. The product of a place where natural forces come together with human forces sometimes in opposition and sometimes as one.  They are salvaged materials from salvaged places and the memories from these places that come together momentarily in between the tides.

As in an archeological dig some shards remain mute, isolated and disconnected waiting for other hands to come along to discover their pattern and reassemble them  They are Nature’s debris re-assembled into puppet like objects, hovering between life and death, on the brink, on the edge.

The art of bringing things to life is how I relate my sculpture to puppetry.  Puppets are objects that always appear to be as much dead as alive; always on the brink of life or death, on the edge, the not knowing.  Puppets are figures of metamorphosis, of magical potential.  They stand on the cusp of what is real and what is longed for.

The Foundlings have their roots in the beginnings of puppets, raw and elemental.  From when man first carved tiny figures from  soft stone, bones and tusks.  From the Venus of Willendorf carved from limestone and covered with red pigment.

They are animated images, constructed bodies that become a physical manifestation of the spirit of a place.

Each puppet suggests a narrative. Memories are projected through these figures,  embedded in them.  They are constructed from a mulititude of narratives layered onto place. 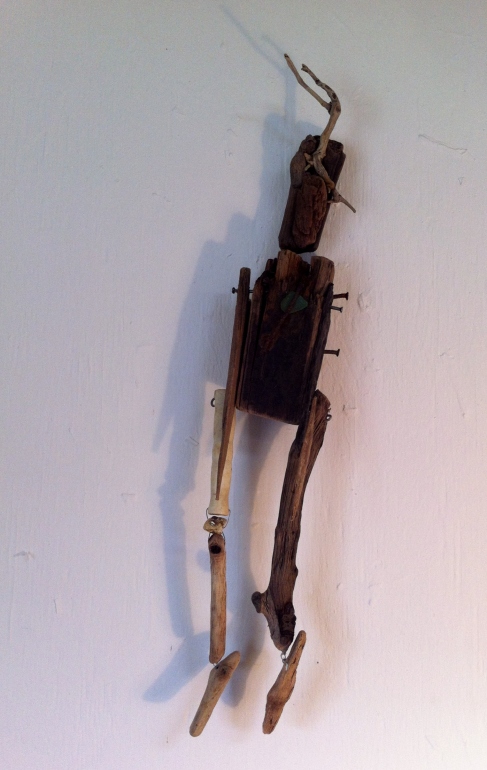 As objects they exist to be animated by action, they cannot perform on their own but need human intervention.  The verb ‘to animate’ does not mean to move but rather it means ‘to give soul to’ from the Latin word ‘anima.’  The notion of soul crops up time and time again in connection with puppets.  There is something intensely magical about being able to bring to life an inanimate object.  The power of being able to articulate that which cannot easily be spoken.  What a gift to be given.

I have always been fascinated by puppets.  There has been a longing too, to make figures, whether they were the soft toys and dolls I made incessantly as a child, to the sculptures I now create.

One of my strongest memories of childhood was the knowledge that for a birthday (can’t remember which now but maybe 8th or 9th) I had asked for the game ‘Buckaroo’. Still available today folks!  It consisted of a plastic donkey that came with a set of brightly coloured accessories.  These objects represented what the creators of the game identified as typical items a donkey, in 19th century mid-west  America, would carry: pick axes, buckets, ropes etc. The object of the game was to load these objects one by one onto the patient donkey until, at some point, between the distribution of weight and some carefully concealed springs, the donkey would lower his head, raise his rump and kick his back legs into the air thus rejecting all the paraphernalia.

I wanted, not the game, but that little donkey that seemed to come to life, and who had movement quite unconnected to human hands.

So what is it about puppets?  Why are some of us drawn to them and why is it that some find them so threatening and intimidating?

In a conversation with E. H. Gombrich, Anthony Gormley remarks:

The basis of our whole relationship to the world, as babies or toddlers, is that we make no distinction between animated and inanimate things.  They all speak to us; they all have a kind of character or voice.  If you think back to your childhood, not only toys but most things which you encounter have this very strong character or physiognomy as Beings of some sort.  (Mitchell, W.J.T. (2000) Anthony Gormley London:Phaidon) 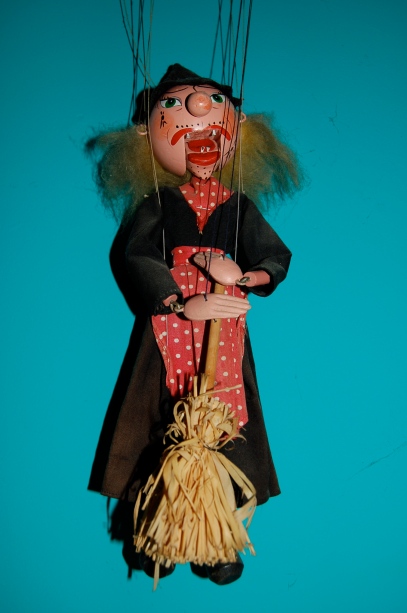 My first puppet – a Pelham Witch.